Tell Us Who You Are

School Leaver Ages up to 19

Full time courses and apprenticeships to achieve your career or university goals.

Higher Education, apprenticeships and part time courses to enhance your career or to learn a new skill.

Employer For your business

A beast of a show

Performing Arts students took to the stage of our Hub Theatre last week with this year’s family pantomime, Beauty and The Beast.

This is the classic story of the beautiful Rose, played by Level 3 Performing Arts student Maddie Caines, who finds herself imprisoned in an enchanted castle by Prince Christopher who has been transformed into a hideous Beast by the evil witch Malabelle, played by Level 3 student Megan-Angel Mitchell.  Elliot Lewis, also a Level 3 Performing Arts student, took on the roles of both the Prince and the Beast.

In addition to Performing Arts students directing this exhilarating adaptation of the show and performing on stage, this theatrical collaboration saw Production Arts students develop, design and build the set, lighting, sound and special effects including pyrotechnics.

Theatrical Hair and Media Make-up students designed and applied all of the character make-up and wigs, whilst Photography students took all of the show promotional and professional headshot photography.

This year’s panto was a resounding success with seven shows taking place across the week, opening up the world of live theatre to nearly 1,000 school children, college students, staff and families from across the local community. City College was delighted to welcome children from Maytree Infant School, St Marys CE School, Polygon School and Sunrise Nursery.

Jan Goatley, the Head Teacher at Maytree Infant School extended her thanks and said: “I would like to thank everyone involved in the production as children from Year 1 and Year 2 all had a marvellous time yesterday and today.  This is such a wonderful opportunity for them to experience theatre.  Well done and many thanks to everyone.”

Further praise came from Donna Berry, St Mary’s CE Primary School. “WOW! Thank you so much for last week! Our children had an absolutely amazing time I have never seen them so engrossed in anything before. I cannot thank all the staff involved enough! We had some tricky children who didn't want to go into the show and the ushers and one of the tech guys went above and beyond with them making sure they felt involved. And the performance!! Again all I can say is WOW! It was so professional and your pupils did an amazing job putting on the show! All the staff and children came out buzzing from watching it. A massive well done and thank you to everyone involved in putting the show together!”

Production Arts Programme Leader, Marc Fairclough commented: “The teamwork and comradery between departments this year was amazing. The second-year students designed the incredible set, sound effects, lighting and AV displays. The effort put in by both years has really paid off, the show has been fantastic and everyone involved should be very proud.”

Ian Rowsell, Performing Arts Senior Teacher said: “The cast did a wonderful and professional job, developing and running the show and the second year students directed a funny, artistic and engaging story. It has been great to see everyone pull together and create a wonderful show that everyone has been enjoying.” 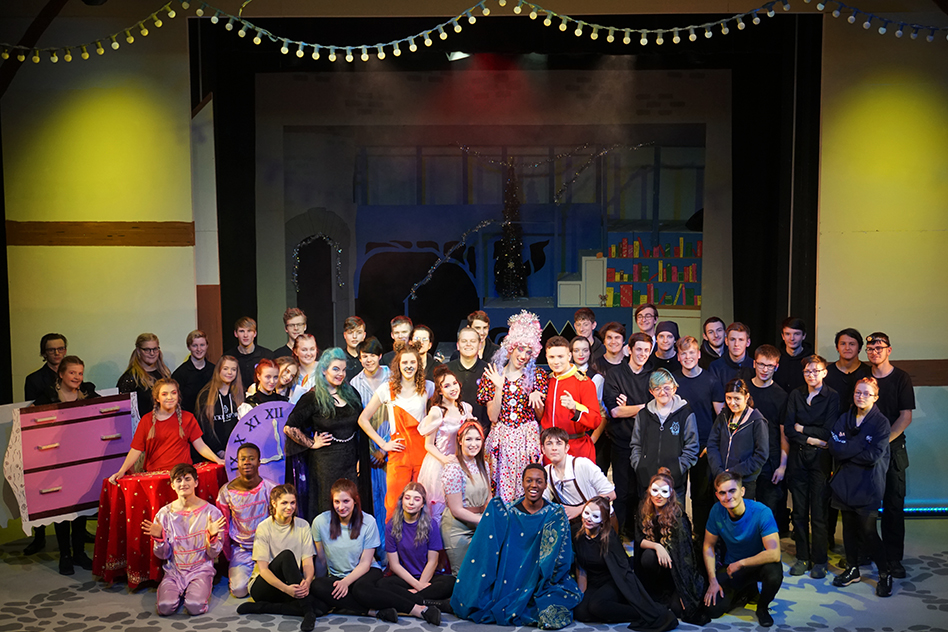